If you need help understanding our People Metrics feature, you can learn more in this article!

Written by Chelsea Wood
Updated over a week ago

People Metrics is a feature built to give you insight into the way your team is using Leadr and the consistency of the development efforts across your organization. This view will show you if your employees are having regular 1:1s with their managers, they have set and updated goals, requested feedback, and overall used Leadr to collaborate with their team.

These focuses are based on what we at Leadr call our Five Foundations: five fundamental practices that research shows are the baseline to the growth of a healthy team. With People Metrics, you’ll be able to track progress on your organization’s regularity in these rhythms. These Five Foundations are the idea that every employee...

1. has 1:1 meetings with their manager, at least bi-weekly

2. understands and is recognized for their unique strengths

4. receives frequent feedback from their manager

5. has a personalized growth/development plan

You can find all of these insights under the People tab in Leadr.

Access to viewing People Metrics depends on your level of permissions in Leadr, and who reports to you within the tool.

You and your team will be able to see insights into the usage of everyone reporting to them – whether directly, or skipping levels. Further, Admin and Executive account types in Leadr will have access to these metrics across the team, regardless of reporting lines.

Team members that aren’t in either of these groups, will simply see their own metrics, and have access to view the profiles of other team members.

How to interpret Leadr People Metrics:

In the top right corner there are 4 symbols and indicators of Kalle’s usage of Leadr – all focused on her relationship with her manager. Since Kalle doesn’t have any direct reports in Leadr, she will only see her own metrics. You can find a breakdown of these metrics and their meanings below. 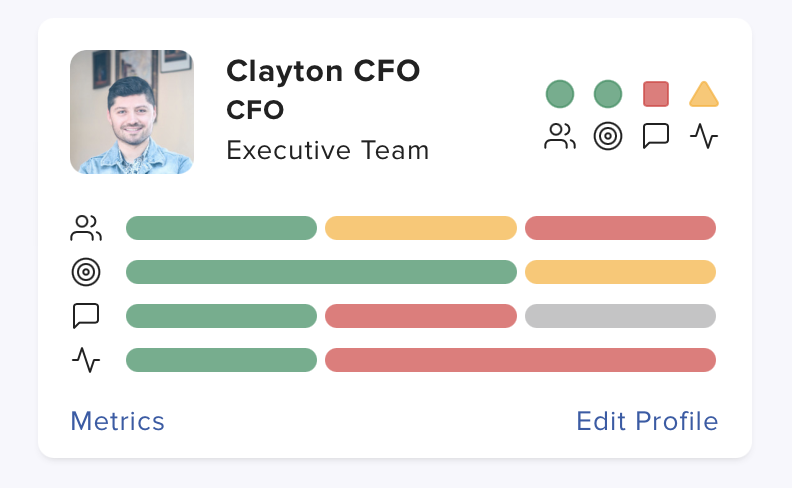 As an Admin or Executive user, or if you are a manager in Leadr, you will be able to see this view for managers who are visible to you in Leadr. For example, this graph breaks down the metrics of Clayton and his relationships with his direct reports. This tells us, for instance, that Clayton has consistent meetings with some of his team – and if we’d like to see the detailed version, we can select Metrics to see who on his team Clayton is meeting with regularly. 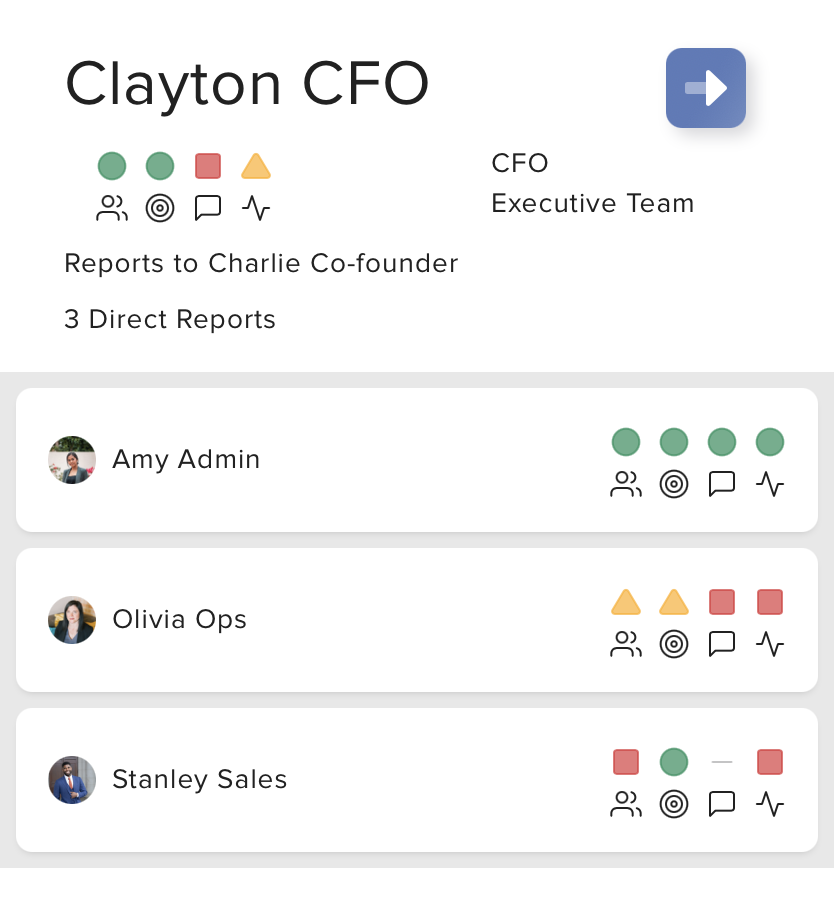 Goals Symbol - Tracking progress toward success helps the team align on direction, while understanding the unique contributions we each make to the mission of the organization. This metric indicates whether a person has active goals in Leadr, that are updated with regularity.

Feedback Symbol - A healthy culture of feedback, allows each team member to produce their best work when their contributions are recognized and individuals collaborate to increase effectiveness. This metric indicates whether a person has recently requested and shared input through the Feedback tool in Leadr.

Activity Symbol - Regular use of the Leadr tool indicates a team that has established habits and rhythms for the practices that promote healthy team growth. This metric indicates whether a person has recently interacted with their team in any capacity inside of Leadr.

As you begin to familiarize yourself with Leadr People Metrics, our team is available to help as needed. If you would like assistance walking through these scores on your team, or guidance in how to coach your team on improving consistency, reach out to your customer success manager, or contact us at support@leadr.com.

Did this answer your question?